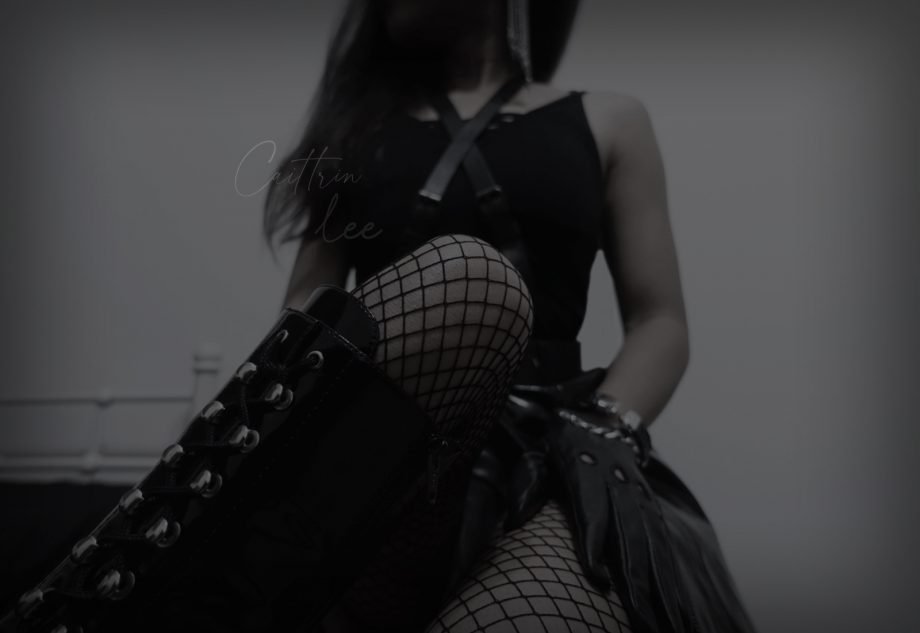 “Get down on your knees,” said Mistress Caittrin in Her soft but firm voice.

As Her slave quickly got down on his knees. This was Evan’s first time meeting his new Mistress and he was eager to make her proud. However, he did not expect it took a devilish turn the moment he walked into Her lair. The lair was a nice whitewashed room with many tools that made him erect really quick and tools that no one knows what they are meant for.

“Today’s your first date with Me, that does not mean I will go easy on you, slave Evan. you’re here to serve Me. I’ve had slaves who said they wishes to serve Me just like you, but they were useless who couldn’t even do simple things such as preparing tea for Me. you better perform better than them if you wish to serve Me again.”

“Now, what’s the first thing you should do when you are in a room with your Mistress?” Asked Mistress Caittrin.

Evan immediately started kissing Her tight boots and got his balls kicked with Her other leg.

“Where’re your manners?” As Mistress Caittrin pull away from Her boots from his lips.

“i am sorry Mistress. May I kiss your boots and worship your feet?” Evan voice trembles.

“Do you think you’ve earned it yet? No. Take off My boots first”, Mistress Caittrin replied in a stern voice.

Slowly, he untied Her bootlaces and started removing his Mistress’s boots and immediately he was pushed onto the ground by his Mistress with Her feet. Using Her feet, She rested her beautiful fishnet covered high arch feet on his groin.

“Mistress, this is too much! I’m getting hard.” Moaned Evan, as his blood flooded to his groin.

“Well, you better remember what W/we discussed. If you get hard without My permission, your cock is going to get some strangulation and you’re going to stay tied until I decide to play with it…” Replied Mistress Caittrin in Her sweet voice.

Trying his best and thinking of the most boring book he ever read he hoped his cock remained soft. However, he just could not stop the blood from flowing as Mistress Caittrin started to wiggle Her toes on his cock.

“Looks like someone is getting hard without permission, should W/we take it out from his boxers and examine it?” As his Mistress, dressed in Her beautiful lingerie started to put on Her leather gloves and started unzipping his jeans. Immediately, the bulge could be seen through the boxers and a sadistic smile could be seen forming on Her face. Before Evan could register, a tight spank was given to his cock and he bit down hard on his lips from screaming in pain.

“That’s what you get for getting hard without My permission.”

“Sorry Mistress, Her slave got carried away and forgot about the punishments.”

Still burning from the spank, Mistress Caittrin took a short walk to Her glass cabinet of toys and took the longest rope he has ever seen and returned. Giving Her new slave a smirk before ordering him to stand up and move to the poster bed. The bed itself looked like it came fresh out of a horror show, with 4 shackles and hinge points on the bed frames and in the middle of the was a hole right at the groin area.

“Take off what’s remaining of your clothes and get onto that bed now SLAVE, I want you to face up and look at the ceiling while reflecting on your pathetic moment just now. Getting hard without My permission resulted in you in your current position.”

Evan removed all his clothing stood naked in front of his Mistress and after gaining Her approval of his bare body he began his climb onto the bed. Lying on the bed and before he knows it, he was forced to spread his hands and legs apart. While his Mistress moved quickly to secure his hands and legs, She whispered into his ears “Disobedient slaves don’t get to see what his Mistress does to his body”.

Without warning, a blindfold masked the lights that were once visible into complete darkness and a ring gag was forced into his mouth. All he could do was stick his tongue out and desperately tried to beg for forgiveness. All that came out from his mouth were incomprehensible gargling sounds.

He could hear his Mistress walking back to her cabinet of toys before returning and started stroking his still burning soft cock. Each stroke brought forth another wave of pleasure and within seconds his cock was all erected again.

“This time, you have My permission to get hard. My… My… look at that cock. Pulsating and twitching begging for more. What a desperate slave you are, and Mistress is going to teach you how to learn to control your desperation.”

Contribution by slave Evan
Edited by Yours Truly