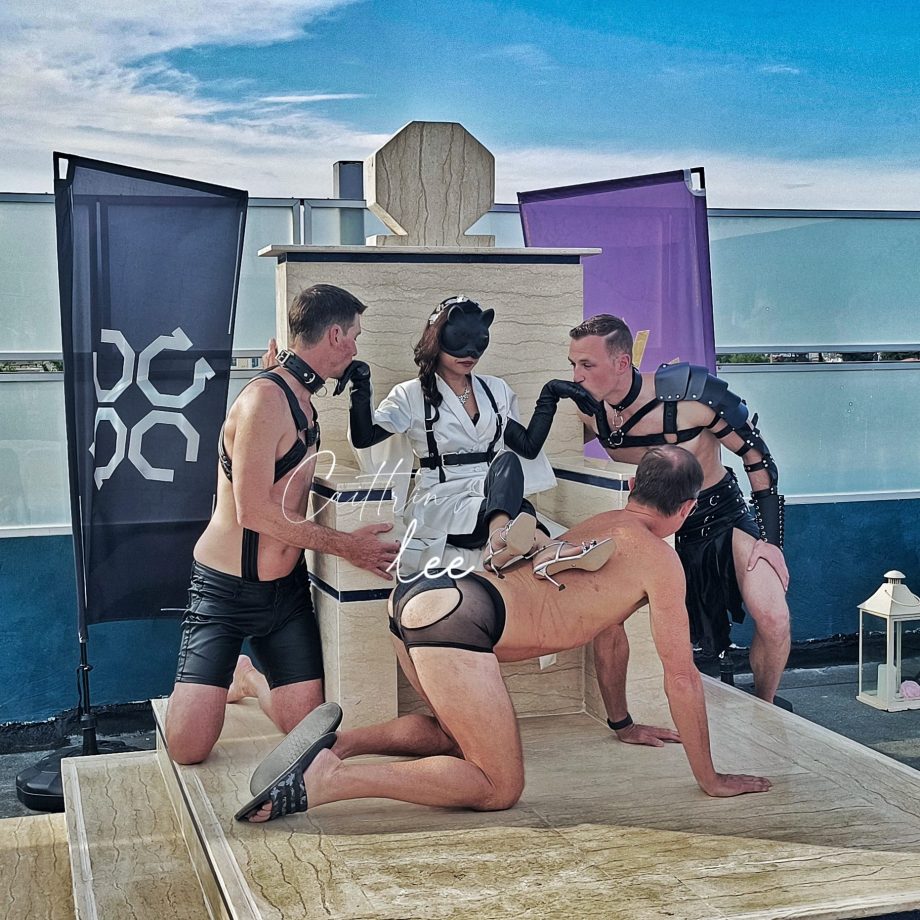 It was such a pleasure to be invited to attend this amazing event hosted by Mistress Alexandra Balance. Most importantly, the subs who made My trip a smooth one or supported Me in any way. Thank you and I appreciate that for making Me smile. This is also the time I’ve discovered who actually cherishes the Lady that they admire and who doesn’t. I received many private greetings of ‘Have a safe trip’ or ‘Welcome Home’ but… it doesn’t have any meaning to it. I just wasted My time and effort opening such messages without any contribution be it through financial, service servitude or even supporting Me publicly through social media. I would like to also thank Miss Julietta for loaning Her wonderfully trained Greek sub as our driver for some of us ladies.

It cost €350 for the VIP event ticket alone as this covers the cost of the food, drinks, venue & etc. Excluding the cocktail drink which you can purchase for €20 each. Additional initial costs beyond that I have to fork out: flights, decent accommodations, taxi trips, food, pet boarding and many more. Thanks to several subs who contributed to making this trip possible even though none of you could take the time off for an extended period (almost two weeks) to accompany Me.

This is also a milestone for Me but I am exhausted, jetlagged, social anxiety, food homesick and the list goes on. Being an outgoing introvert, this event pushes My limit after so long of not socialising in a massive crowd for a long time. At least there are some familiar faces (Hello Alrik!) and being at the Omega Compound prior to the event made Me feel less foreign because I already know the layout of the space (More private pictures to loyal admirers only!). This is also the first time I showed Myself smiling with teeth on camera as that’s one of the reasons why My subs admire Me.

“They slander me in private and the universe awards me in public. Meditate on that ❤️” – Madame Caramel.

Many told Me that I could never succeed and it was just a phase that I could not do professional domination long term. It’s been almost five years and counting. A lone ranger, I struggled with no mentors and people be bitching regardless of gender, trying to out Me through legal papers or stalk Me. I’ve never thought I could solo travel the world extensively after many of My life years have been robbed away due to a certain relationship.

Almost everyone was “face out” and I was so conscious of My face picture being taken because there are literally cameras EVERYWHERE during the event. Being in My signature kitty mask hinders My view too. I’ve put out the reason why I do not show My face virtually even though some of My vanilla peers and acquaintances know what I do whether I told them (or not). Read here: https://caittrinuniverse.com/etiquette/

Moving on, I had to reschedule My cancelled flight two weeks before and I had the option to choose to fly mid-week or fly in one week earlier so I chose the latter. I figured that if I could attend the munch and rope jam from Fetlife events, I could socialise and also practice My shibari skills, which I am glad I did. Athina is a completely new city that I travelled to and it will be a good start to know My way around, people, culture and language. Till now, I don’t even know where My hotel is situated or the public transport system as I took taxis everywhere. It feels impossible to walk out just like in Jakarta and Kuala Lumpur. I don’t even know where I am going.

I was speaking to a pair of British ladies tourists while I was on another Greek island for an escape, and they too agreed it’s not a viable option for Me to take the overnight ferry alone and makes better sense for Me to do an hour flight instead. For the first time ever, I felt so happy I didn’t have to take out My laptop at the TSA (because I didn’t bring it and left it in Athina) or go to the counter for checked baggage at the aeroport because all I had was a carry-on (Read on more to know why).

Due to that unforeseen circumstance, honestly, I wasn’t prepared to fly. Like the majority of My travels, it’s a YOLO moment, Me surviving solely on adrenaline. However, I’ve created a packing system that I’ve improvised over and over which definitely helps in the last minute packing process. The event was for three days. At least a month prior to the event, I had to plan what to wear for each day with themes. Special honourable mention to sub J for sponsoring most of My outfits – Latex pieces and leather gloves. He gifted it pre-pandemic over the past years and finally, I had the chance to showcase it to the world. I also did last-minute shopping to complement the outfits. I’ve also had My formal satin dress custom made pre-pandemic and I’m so glad to find a chance to wear it out.

I also would like to thank Pen & Kink for designing the graphics of this awesome scarf of Mine I wore on the second day. Check out this amazing sub’s work here: https://www.redbubble.com/people/penandkink/shop

More pictures of what happened during the event will only be revealed to My loyal admirers. Also, there is no Livestream available because it is unfair to those who paid to be in the event. The main point is for you to attend and no perv for free. A full-time event slave had to pay €2000 to attend and serve everyone. What have you contributed?

I didn’t travel light this time because I knew I planned to take taxis to and fro the hotels. I had some leeway and maxed out My luggage allowances (Purchased more actually). The outfits and My Dyson hair set (Thanks S!) are so crucial that I decided to place them in a cabin suitcase (I rarely travel with it) and keep them with Me the entire time. I realised when unpacking on the second day in Athina that I had 6 pairs of shoes in total – I removed My heavy platform Pleaser boots at the last minute before heading to the airport because it’s taking up too much space and weight.

I was speaking to Goddess Tangent on the first day of the event and this is what happened to her checked baggage (See Ariana’s tweet below). That’s everyone’s worst nightmare.

Proud to represent People Of Colour Asian, being the only Singaporean & sharing our local Singapore cuisine. I was at the airport waiting for My flight back home and chatted casually with this random lady. From Czechia, she asked whether there is racism in Singapore because she experienced it while she is working in Dublin. Despite Singapore’s amazing city infrastructure that I boast to her and literally everyone that I talked to, racism, sex workers and discrimination against LGBTQ+ still exist. It’s still subtle and not physical harm compared to other developed cities.

“I love my country but it doesn’t love me back. ” – Adrianna

To many people, I’m still not considered ‘Chinese’ enough though My fluent Singlish without a certain race accent to be ‘Chinese’ because I’m tanned and I don’t look ‘Chinese’ or ‘mixed’ enough to be called mixed. I’m always known to others as that ‘Non-Chinese’ Domme. Why are people criticising My bad Mandarin when some of you who actually came from a pure Chinese family can’t even speak Mandarin? It just so happened I was raised in an English speaking family with few other languages I learned in school. I honestly don’t care if My English isn’t perfect too because it just means I know another language. The main purpose is to communicate. A non-native English speaker will not be able to understand Me if I use fancy English vocabulary.

I’ll be sharing more about My trip in My next blog post. Stay tuned and remember to subscribe to My mailing list to receive updates! (Especially if you don’t perv on My social media)

Here are some non-people pictures and being the slow eater (As always!). The invaluable knowledge I learned from the OGs and networking opportunity to meet other powerful Ladies from all over the world. I am blessed.

ps. I managed to rely on Myself to peel the prawns